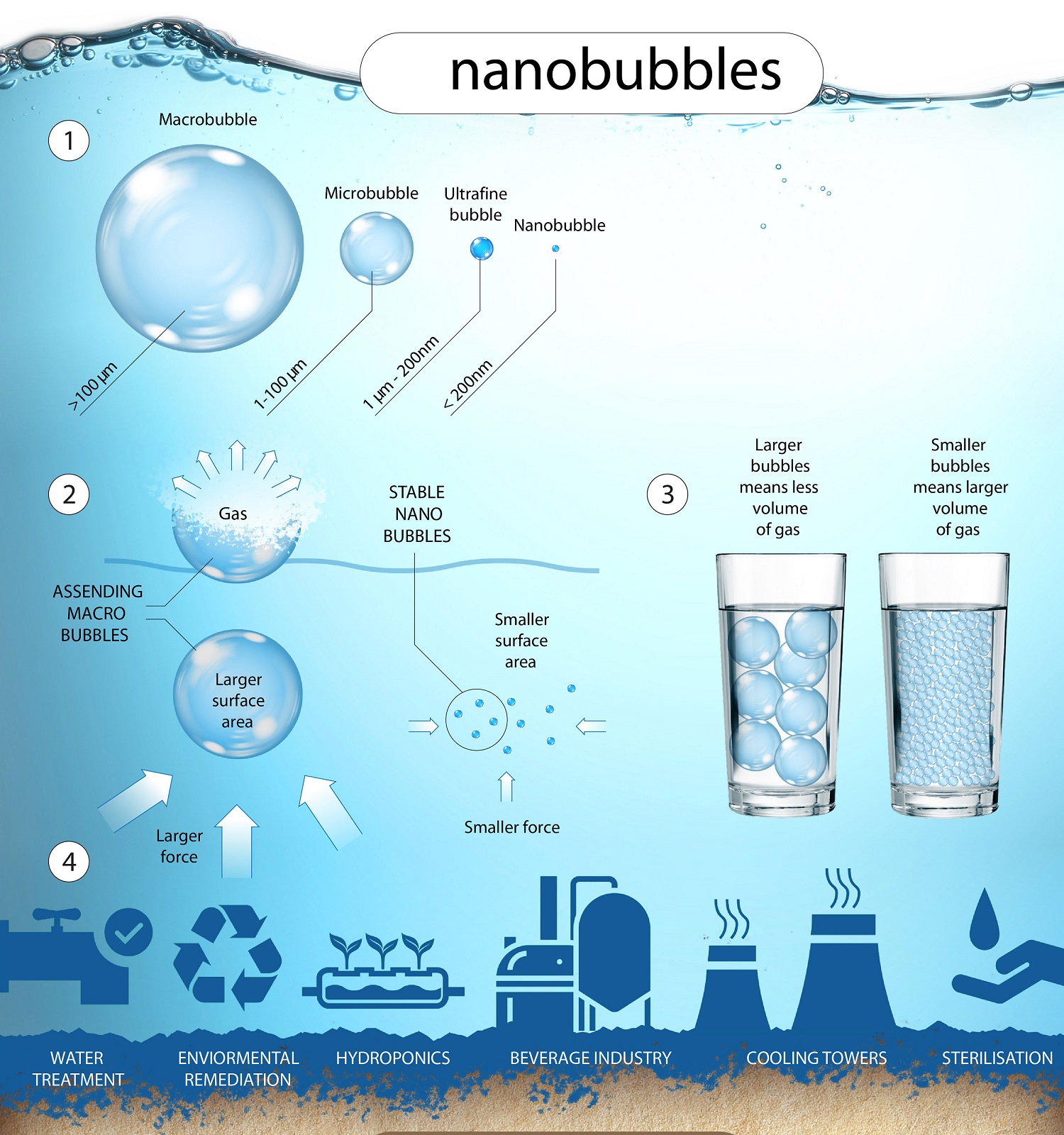 Researchers at University College Dublin (UCD) have discovered a new energy-efficient method to generate and release substantial volumes of metastable, nano-scale gas bubbles in water, in excess of natural solubility levels.The discovery has the potential to disrupt a number of industries including; wastewater treatment, gas storage, food, bio-pharma and brewing.

Micron-sized bubbles are tiny gas bubbles with a diameter of less than 50 micron (μm), a micron (μm) is a millionth of a metre, and they have a number of industrial applications, including in wastewater treatment. However micron-sized bubbles decrease in size and eventually disappear underwater due to the rapid dissolution of their interior gas, which limits their industrial potential.

Nanobubbles are also tiny gas bubbles but on the nanometre (nm) scale. A nanometre is one billionth of a metre, and for example a DNA molecule is ca. 2.5 nm wide and a human hair is ca. 60,000 – 100,000 nm wide. Nanobubbles are thermodynamically metastable for many months or even longer, in contrast to micron-sized bubbles, and have therefore enhanced gas-transfer properties and greater industrial potential.

The challenge for scientists to date has been the development of easily controlled methods to promote nanobubble formation and nanobubble release.

The discovery of a new, energy-efficient and easily controlled method to generate and release large volumes of nanobubbles has been made by Professor Niall English and Dr Mohammad Reza Ghaani at UCD’s School of Chemical and Bioprocess Engineering.

Outlining the discovery Professor Niall English, UCD School of Chemical and Bioprocess Engineering said, “Our new fundamental discovery involves the application of electric fields, which cause transient negative-pressure regions at gas-liquid interfaces, thereby resulting in gas incorporation in liquids in nanoscale-bubble form. It is very energy-efficient, additive-free, and works for a wide range of gases and the greatly enhanced gas solubility in water is highly metastable, lasting at least for many months.”

He added, “Following the completion of a research programme in collaboration with Professor Peter Kusalik at the University of Calgary, we have established a good theoretical understanding of nanobubble mobility in electric fields which contributes to our microscopic knowledge of nanobubble stability.”

This development in nanobubble science has the potential to dramatically increase gas-transfer rates and deliver a step-change in operational efficiencies of a number of industrial sectors, including; gas storage, wastewater treatment, bio-pharma, brewing, agriculture and food.

Dr Mohammad Reza Ghaani, UCD School of Chemical and Bioprocess Engineering, said, “Our new method of nanobubble generation has multiple commercial applications and has the potential to boost the ability to store gas directly in aqueous solutions over months. In addition it has the potential to boost by several-fold dissolved-gas levels, resulting in greater capacities to treat wastewater and also enhance mass transfer in oxygen-limited biochemical and biopharma reactions, such as fermentation processes in the food and brewing industries.”

He added, “Working with UCD’s knowledge transfer team at NovaUCD we have filed patent applications and we are also looking to commercialise the technology through a UCD spin-out company.”

Paper co-author, Professor Peter Kusalik, Department of Chemistry, University of Calgary, said, “Our work also reveals the molecular origins for the apparent stability of nanobubbles, which might otherwise be expected not to be stable due to their very small size. The origins of the behaviour can be traced to the unique structure of the water molecules at boundary between the liquid water and the gas.”

“The explanation also accounts for why these otherwise uncharged bubbles can be seen to move when an electric field is applied. Thus, this study is able to provide a clear and consistent explanation to a previously puzzling problem.”

Professor English concluded, “We would like to thank Irish company Particular Sciences for access to dynamic-light scattering (DLS) equipment used during this research.”

The (open-access) article is entitled, Massive Generation of Metastable Bulk Nanobubbles in Water by External Electric Fields; and is available via https://doi.org/10.1126/sciadv.aaz0094.