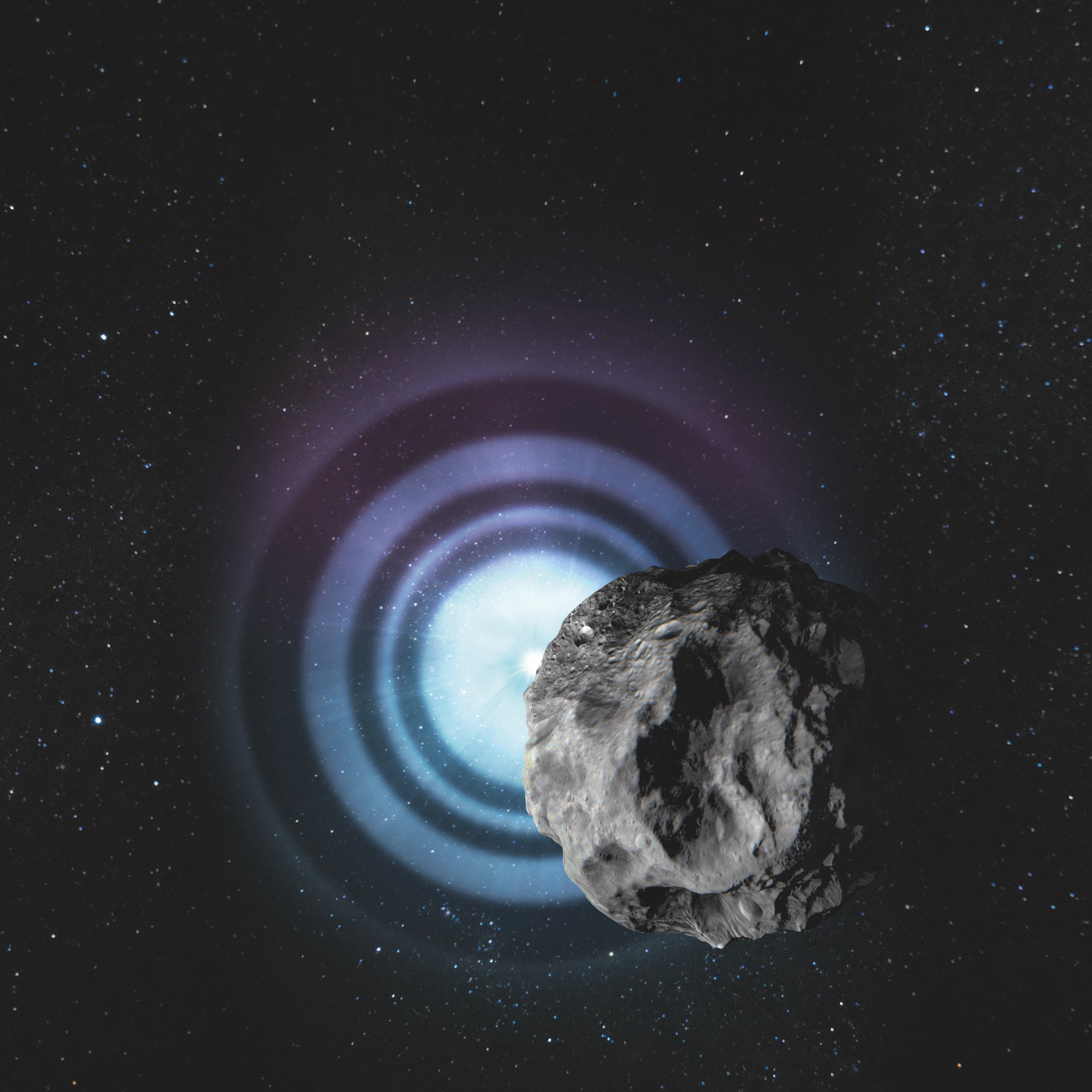 Scientists of the VERITAS Collaboration, including a University College Dublin (UCD) physicist, Associate Professor John Quinn, who is the VERITAS spokesperson, have today published a paper in the Nature Astronomy journal detailing the results of their work with the VERITAS array to measure the smallest apparent size of stars in the night sky known to date.

The VERITAS collaboration consists of about 80 scientists from 20 Institutions in the United States, Canada, Germany and Ireland including scientists at UCD, NUI Galway and Cork IT.

VERITAS is the world’s most sensitive very-high-energy gamma-ray observatory, and it detects gamma rays via the extremely brief flashes of blue “Cherenkov” light they create when they are absorbed in the Earth’s atmosphere.

When an asteroid passes in front of a star, the resulting diffraction pattern (image above greatly exaggerated) can reveal the star’s angular size. (Credit: DESY, Lucid Berlin)

Using the four 12m gamma-ray telescopes of VERITAS, the team collected 300 images per second to detect the diffraction pattern in the shadow sweeping past the telescopes as the star TYC 5517-227-1 was occulted by the 60km asteroid Imprinetta.

“From these data, the brightness profile of the diffraction pattern of the star was reconstructed with high accuracy,” said Dr Michael Daniel, Operations Manager, VERITAS.

“This allowed us to determine the actual diameter of the star, and determine it to be a red giant, although it could previously be classified as ambiguous.”

Three months later, on May 22, 2018, the team repeated the experiment when asteroid Penelope, diameter 88km occulted star TYC 278-748-1 located 700 light years from Earth. The measurements revealed the star to be 2.17 times the diameter Earth’s Sun, correcting an earlier estimation that placed the star’s diameter at 1.415 times that of our sun.

With almost any star on the night sky too distant from Earth to be directly measured using even the best of optical telescopes, scientists overcame these limitations using diffraction, which occurs when an object, like an asteroid, passes in front of a star, making a shadow called an occultation.

“The incredibly faint shadows of asteroids pass over us every day,” explained Dr Tarek Hassan of DESY, the German high-energy physics institute. “But the rim of the shadow isn’t perfectly sharp. Instead, wrinkles of light surround the central shadow, like water ripples.”

VERITAS spokesperson, Associate Professor John Quinn, UCD School of Physics, one of the observers who conducted the observations of May 22, 2018, said, “The large light collecting ability of the VERITAS telescopes, coupled with their fast light detectors and electronics, allows measurement of the rapidly varying wrinkles in the shadow.”

“This study opens up the opportunity to use VERITAS to study a whole variety of rapidly-varying optical phenomena and it is fantastic to see this innovative use of the telescopes for scientific applications beyond which they were originally designed.”

The study was led by Dr Michael Daniel of the Harvard-Smithsonian Center for Astrophysics and Dr Tarek Hassan of DESY. This study resulted in the direct measurement of the size of a star at the smallest angular scale in the night sky to date and established a new method to determine the angular diameter of stars.

The full study is published in Nature Astronomy and is available via https://www.nature.com/articles/s41550-019-0741-z