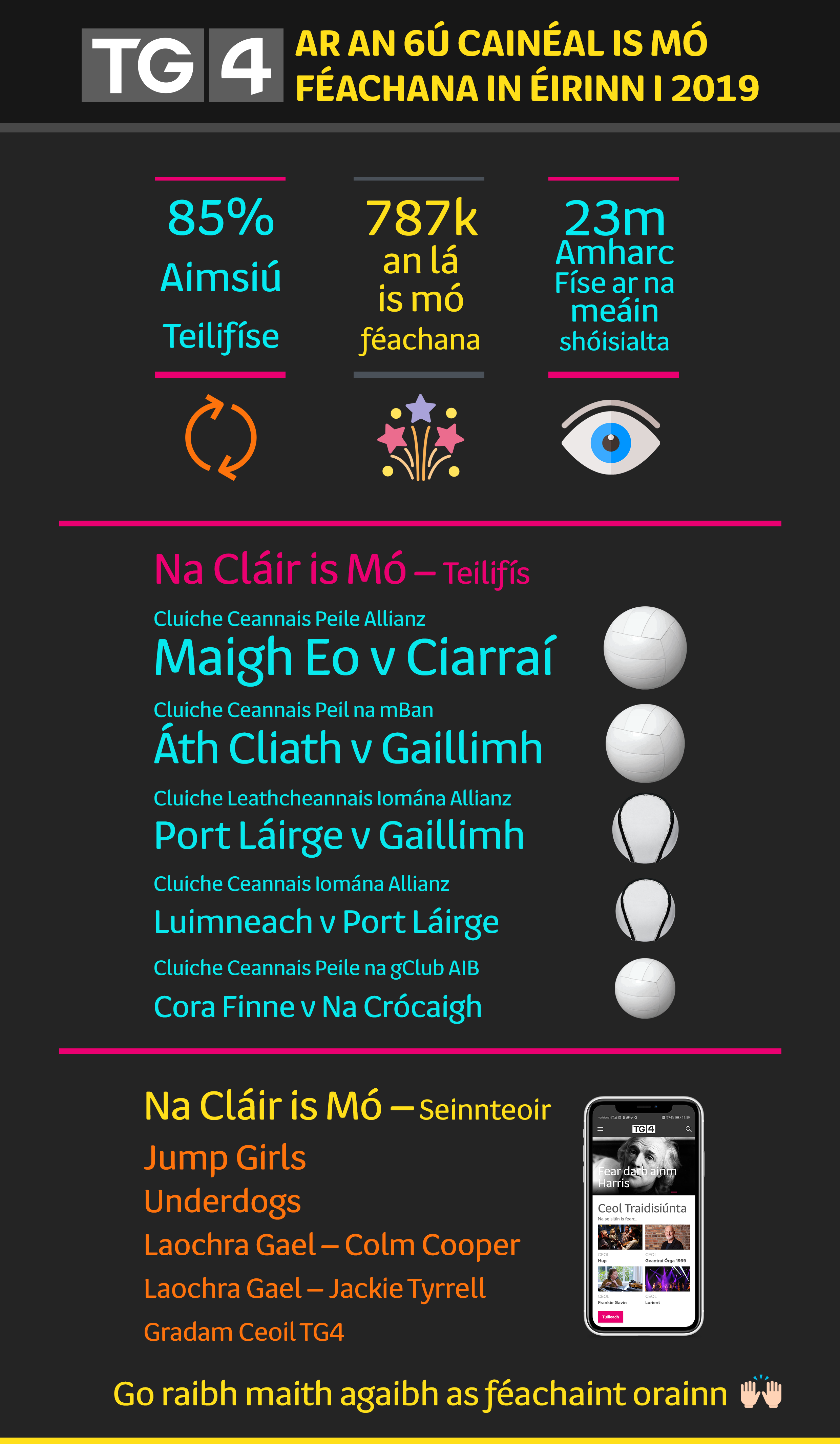 TG4 was the 6th most watched channel in Ireland in 2019, moving up one place from 7th where it had ranked since 2014.  This is the first time TG4 has ranked 6th since it began broadcasting in 1996.  TG4 is now watched more than BBC Two, Virgin Media Three and Channel 4 in Ireland. 85% of the population watched TG4 at some stage during 2019. TG4’s highest reach on any day was 787,000 which occured on September 15th, the day the TG4 Ladies Football Final between Dublin and Galway took place.  The match was attended by 56,114 people, a new record for the game.

Mayo v Kerry Allianz League Football Final on GAA BEO was the most watched programme in 2019, with an average audience of 265,000 viewers and a share of 30.4% of the viewing audience.

Country music continued in popularity on TG4 in 2019, with Opry le Daniel celebrating Margo’s 55 year career drawing over 83,000 viewers on Christmas Eve.  Documentaries proved to be as popular as ever on TG4, with series such as ‘Finné’, ‘Laochra Gael’, and one-off documentaries such as ‘Uchtú – Evanne Ní Chuilinn’, ‘Phil Coutler – Mo Shaol‘ and ‘Fear Darb Ainm Harris’, attracting audiences in primetime schedules in competitve viewing schedule slots.

Live events such as Gradam Ceoil TG4, Fleadh TV, Mary From Dungloe and The Irish Post Awards attracted large views on air as well as on social media.  Social media views grew from 18m in 2018 to 23m in 2019.

Alan Esslemont, TG4’s Director General says “TG4 puts ‘súil eile’ or ‘an alternative perspective’ at the heart of its vision for public service broadcasting and that vision is clearly increasingly popular with Irish viewers. I am extremely proud of all of our team in Baile na hAbhann and of all of the TG4 talent throughout Ireland, in front of and behind the cameras for bringing TG4 to its highest ever audience ranking.”