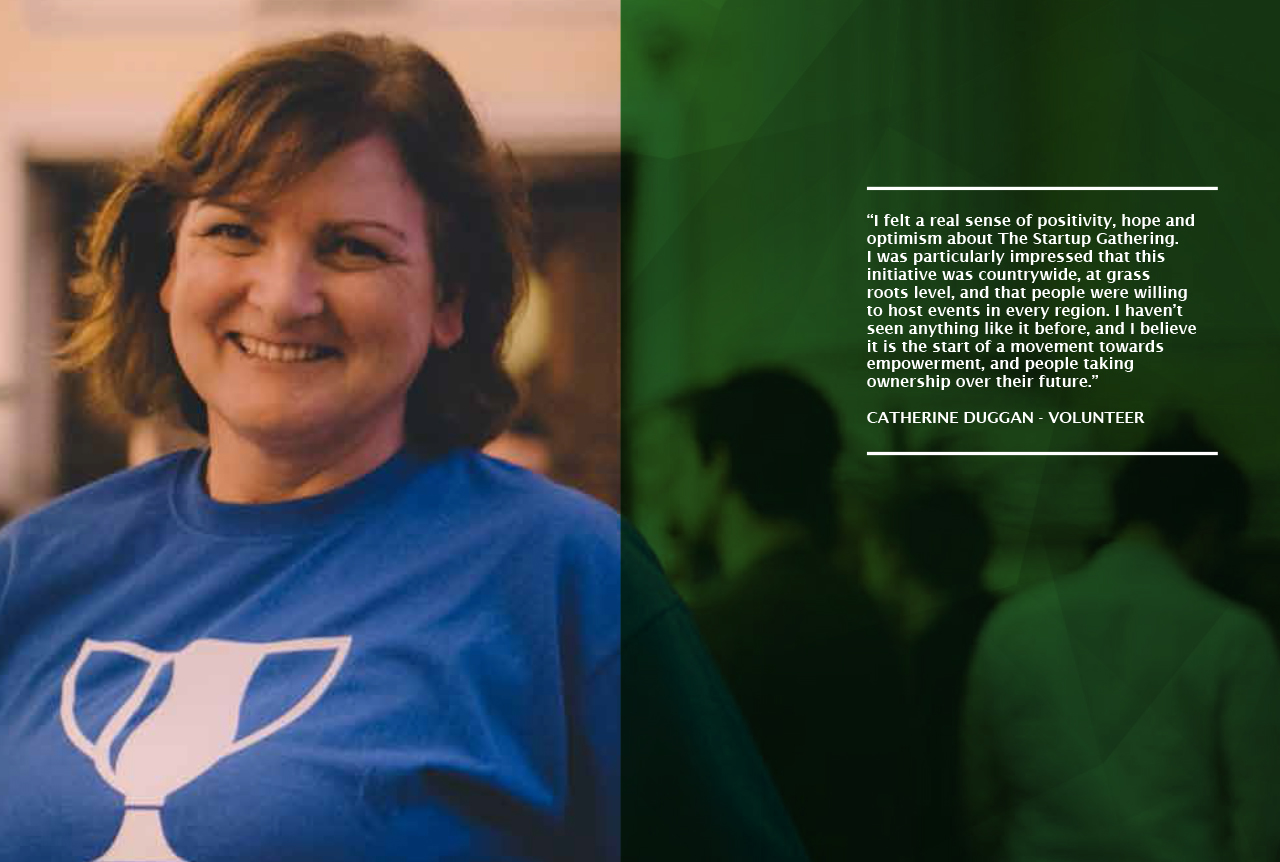 It all began on a wet and windy morning on Monday 5th October. The day kicked off in the Google HQ auditorium with a welcome by Ronan Harris, VP Google EMEA, Head of Google Ireland. Minister Bruton, Minister for Jobs, Enterprise & Innovation was next to speak, followed by Liam McLoughlin, Chief Executive Retail Ireland at Bank of Ireland, then Eoin Costello, CEO StartUp Ireland.

Philip Moynagh – Vice President, Internet of Things Group at Intel Corporation made his Keynote speech, followed by Minister Nash Minister of State for Business and Employment.

Next up Vincent Wall of Newstalk facilitated a discussion with Oscar Ramirez Munoz and Valto Loikkanen of Startup Commons Global regarding the value of creating the correct ecosystem for startups.

As I was otherwise engaged with my volunteering duties, I was unable to sit in for the start of the event as detailed above.  However, from 11 am onwards I attended the breakout sessions, panel and feedback discussions, Niamh Bushnell, Startup Commissioner’s presentation and closing remarks by Eoin Costello, CEO Startup Ireland.

The breakout sessions for discussion covered 6 key elements.  These elements were identified by Startup Commons Global as necessary for the creation of a successful startup ecosystem:

Two of the feedback ideas from the breakout sessions that particularly resonated with me were:

In order to develop a successful startup ecosystem in Ireland, we need to concentrate on setting up good communication channels between all involved in the startup sector.  Organisations identified were multinationals, corporates, state agencies, financial institution and other existing bodies connected to the startup sector.

2. A clear roadmap for start-ups

It was suggested that a clear roadmap would enable startups to identify where they were positioned in relation to the startup process. This would roadmap could be a successful tool to enable startups to avail of the appropriate supports open to them at each stage of their development, ranging from ideation through to successful launch, e.g. start, scale, succeed.

1. How start-ups are being supported by the city’s infrastructure, networks, and organisations.

2. How the big tech companies and Enterprise Ireland are helping start-ups scale.

What struck me most about these discussions was the willingness, openness, and positivity about helping, encouraging and developing the existing supports available for startups in Ireland?   Organisations that were represented included, Dublin City Council, CONNECT, Bank of Ireland, Dell, Google and Enterprise Ireland.

The topic of the final panel discussion was:

Start, Scale, Succeed from Ireland – The Entrepreneurs and Supporters View

This discussion was facilitated by Niamh Bushnell, Dublin Commissioner for Startups.  I was particularly inspired by one panel member, Jayne Ronayne, CoFounder of KonnectAgain and her journey to success. Her company developed an online platform to help students and Alumni connect with each other. She spoke about the benefits of having teams based both in Silicon Valley, USA, and Dublin.

After this discussion, Oscar Ramirez Munoz and Valto Loikkanen of Startup Commons Global gave their feedback on the information gathered during the breakout sessions. One recommendation, which I thought was an excellent idea, was to establish an overall organisation to encompass the diverse bodies that currently interact with startups throughout Ireland.

Niamh Bushnell, Dublin Commissioner for Startups then took to the podium and recapped on her work over the past year. I was particularly interested to hear about the 1st Friday Brekkie event. This is a free networking meeting held in the first week of the month in her office in the DDDA Building, Custom House, Quay, Dublin, between 8am and 10am, and how successful they were becoming.

She also outlined three key areas that she will be concentrating on in 2016:

The morning session ended with Eoin Costello outlining the next steps in the startup initiative by calling for a startup manifesto to be created and completed by November of this year. He also announced that the date of the next Startup Gathering will be held in November 2016.

We broke for lunch and the evening reception was held in the Bank of Ireland, Banking Hall, College Green. It was a much more relaxed affair.

I was particularly inspired by Anne Heraty.  I listened with admiration to her startup story, and the reasons why she decided to create her own business. I learned about her entrepreneurial, spirit, hard work, determination, and her ability to adapt to the economic ups and downs that she encountered along the way. The event ended with more networking opportunities.

There was no rest for the StartUp Gathering team as they were preparing to head off to other events throughout the week starting off the next day in Waterford, then Cork, Limerick, and Galway.

Separate events were being hosted throughout the country by different organisations and companies during the week.

I felt a real sense of positivity, hope, and optimism about the Startup Gathering. I was particularly impressed that this initiative was countrywide, at grassroots level, and that people were willing to host events in every region.  I haven’t seen anything like it before, and I believe it is the start of a movement towards empowerment, and people taking ownership over their future.  This was something that I also experience when I participated in the Startup Weekend Dublin 2015 in August.

Congratulations to all involved. I’m looking forward to November 2016 for Startup Gathering II.