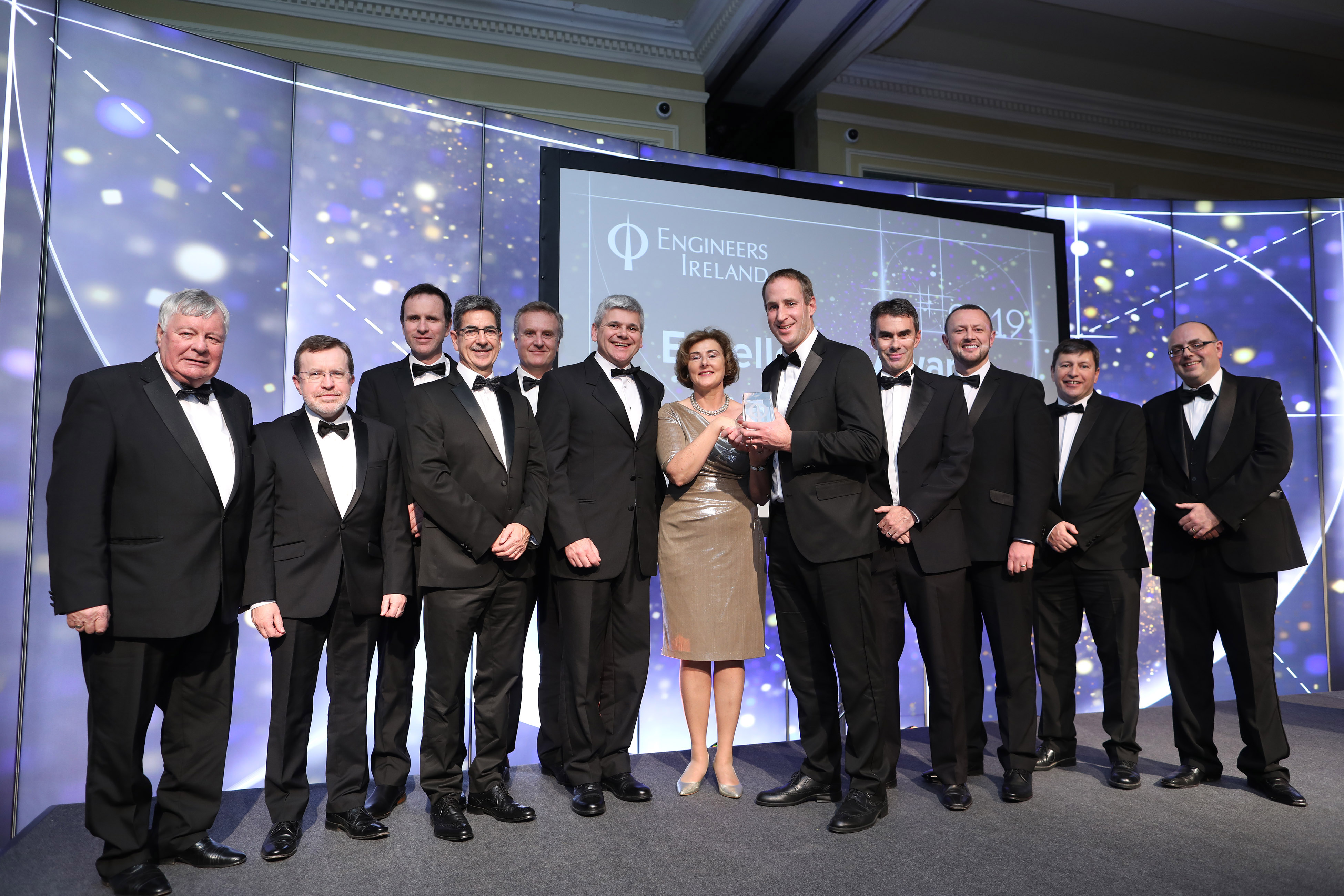 Winners all round! The East Tip Haulbowline Island Remediation Project by Cork County Council, RPS, PJ Hegarty & Sons and the Department of Agriculture, Food and the Marine has been awarded the title of Engineering Project of the Year, sponsored by Transport Infrastructure Ireland at the Engineers Ireland Excellence Awards, held in association with ESB.

The transformation of the East Tip of Haulbowline Island has been voted national Engineering Project of the Year for 2019, it has been announced.

The remediation project, delivered on time and under budget, has seen 22-acres of the island’s East Tip transformed from a desolate, toxic, industrial site into a magnificent public recreational facility for local residents, workers, and visitors in what has been one of the biggest environmental works in the history of the State.

The site at Haulbowline Island in Co Cork, formerly the home of Irish Steel, has been used for waste disposal for decades, with an estimated 650,000 cubic meters of slag and other waste metal from the steelworks deposited on the site from the 1960s until steel making ended at the plant in 2001.  Adopting the most innovative and customised engineering solutions throughout to overcome many challenges, the East Tip now boasts new playing pitches, walkways, cycleways, seating areas and the planting of hundreds of trees, woodlands and wildflower areas.

Undertaken by Cork County Council, RPS, PJ Hegarty & Sons and the Department of Agriculture, Food and the Marine, the project won out in the flagship category of the tenth annual Engineers Ireland Excellence Awards, held in association with ESB, at a ceremony in the InterContinental Hotel in Dublin. The Engineering Project of the Year category is sponsored by Transport Infrastructure Ireland and is voted for by a panel of judges and the public.

Speaking at the Engineers Ireland Excellence Awards 2019 about the development, Dr Cormac Ó Súilleabháin, the Project’s Manager from Cork County Council, said: “This was an immensely challenging project considering the extensive risks presented by the uniqueness of the site, nature, and characteristics of the waste material involved, and location within Cork Harbour. However, despite all this, the project was delivered in a timely and cost-effective manner and very much provides a template for the successful delivery of transformative public sector projects. Cork Harbour has been transformed by the remediation of the East Tip, and we believe this is a great civil and environmental engineering achievement.  It’s great to see this recognised by Engineers Ireland and we are very appreciative of this award this evening.”

The East Tip Haulbowline Island Remediation Project was also awarded the ‘Local Authority Engineering Initiative Award’, sponsored by Colas Bitumen Emulsions, and with two awards in this category, this award was jointly won by Cork City Council, Keating, and Arup for the Mary Elmes Bridge project.

In other award categories, Dr Cristina Paduano, an Aerospace Engineer, won the prestigious ‘Chartered Engineer of the Year Award’, sponsored by Arup. The professional title of Chartered Engineer, considered to be the gold standard of the profession, was established in Ireland 50 years ago this year. Within the Republic of Ireland, Engineers Ireland is the sole authority to award the title, which is granted to professional engineers who, through a rigorous review process, have shown their ability to apply their professional competencies in the workplace.

Pat O’Doherty, ESB Chief Executive, said: “This year’s awards once again highlight the outstanding and diverse achievements of engineers across Ireland who have demonstrated exceptional engineering skills through their work.  Building a progressive, sustainable Ireland is of paramount importance and with engineers a critical part of making this a reality, now more than ever we must ensure Ireland has a ready supply of skilled engineers to safeguard our society’s future development. We are proud sponsors of the Engineers Ireland Excellence Awards now for many years and it is events like this that inspire and encourage further innovation in the area.  I commend all the participants in the various categories of this year’s awards.”

“Engineering is about making the impossible a reality, it is about thinking beyond the conventional to tackle the biggest challenges in society and this year’s projects once again exhibit the best of our sector in this regard,” Caroline Spillane, Engineers Ireland Director General, said.  “The initiatives recognized by our annual Excellence Awards make a vital contribution to Ireland’s sustainable future and showcase the talented and creative engineers we have across the country.  I offer my congratulations to each of the project teams and engineering leaders involved, with a special word of mention for the overall Engineering Project of the Year winner East Tip Haulbowline Island Remediation Project, which has been remarkable in its success transforming what was an environmentally toxic waste ground into a magnificent eco-friendly public park of significant amenity value. This has been done through high-quality engineering design, construction and project delivery. This project will hugely benefit the region for generations to come.”

Also honoured at the Engineers Ireland Excellence Awards 2019 were: Martin Naughton, Chartered Engineer, Chairman of the Shareholder Supervisory Board of the Glen Dimplex Group, who was presented with the ‘ESB Outstanding Contribution to Engineering Award’; Connor McGrath, who received the ‘ESB International Engineer of the Year Award’ for his work in in Ladakh, India on an upgrade programme at the Druk White Lotus School; and Tom Costello, Head of Construction at IPUT, who won the ‘President’s Award’, sponsored by CRH. The Edge Programme by CONNECT Centre at Trinity College Dublin won the Accenture sponsored ‘Engineering Education Award’ while brother’s Nick and Jack Cotter from Limerick, who won the Siemens ‘Innovative Student Engineer of the Year Award’ earlier this year, were also recognised at the event.